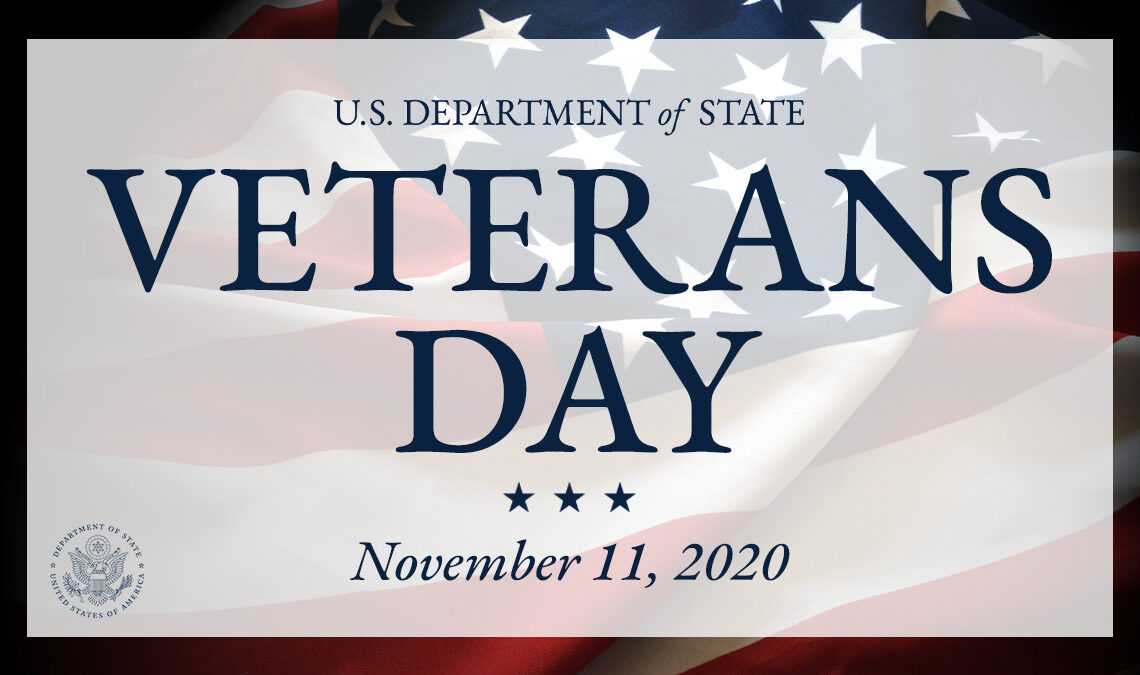 November 11 is Veterans Day in the United States – an important national holiday on which we honor all those who served our country. Originally known as Armistice Day, because it falls on the day that marks the ending of World War One, the day originally paid tribute to soldiers of the First and Second World War. Many other countries still mark this day in remembrance of soldiers who fell and fought in the two World Wars. In the United States President Dwight D. Eisenhower changed its official title in 1954 to Veterans Day, and since then November 11 has honored all those who have served in the United States Armed Forces.

Today, here at the Embassy, we pay tribute to all those brave men and women, living and dead, who have served our own and allied countries in all wars throughout time. One of the ways we do this is by presenting wreaths at memorials for the fallen soldiers as a sign of respect for allies and the bonds between those who fought in World War I and World War II.

All over the world stand memorials for soldiers and others who fought for peace and freedom and fell in war and conflict. These memorials are a reminder of war and those who died while hoping to return to their homes to see their loved ones again. The soldiers who made the ultimate sacrifices and answered the call.

At the same time, these memorials serve as a sign of respect for the fallen and those who have lost. The sacrifices made by those who rest in the gravesites are embedded in our memory throughout time. They continue to serve as a reminder on the course of history.

Denmark also has memorial sites and graves. Many of these pay respect to soldiers from other nations who died in Denmark during World War I and World War II.

Because of these memorials, soldiers from other countries who fell on Danish soil are not left behind but honored by those who knew them as their lives came to an end. They have a new home to rest in peace, a host nation. They rest among new friends in a foreign country, and friendship continues to persist.

Today, we at the Embassy have visited three memorial sites for fallen veterans of World War One and World War Two at three Danish cemeteries – Assistens Cemetery, Vestre Cemetery, and Bispebjerg Cemetery.

Armistice Day has been marked at Assistens Cemetery in Copenhagen since 1920 where the memorial with the graves of 23 soldiers was built. The French and Belgian soldiers who rest here died after World War I. They were evacuated from a prison camp in Germany to Denmark after the war. But in 1918-19, the Spanish flu spread throughout the world. The soldiers had survived trench warfare, starvation, detainment, and many other hardships during the war. However, sadly, they succumbed to the Spanish flu during their detainment in Denmark.

Vestre Cemetery also has a memorial with the graves of 19 former British prisoners of war who died in Copenhagen in 1918-1919. These British soldiers had been detained in German prison camps. Tragically, they all died of Spanish flu before they could return to their homeland. The soldiers had a military funeral, and their Danish friends placed a memorial at the cemetery to honor those who had died.

The U.S. Embassy in Copenhagen honors and thanks all those brave soldiers who sacrificed their lives in the fight for peace. Our thoughts are with those who have lost their loved ones in war and conflict.