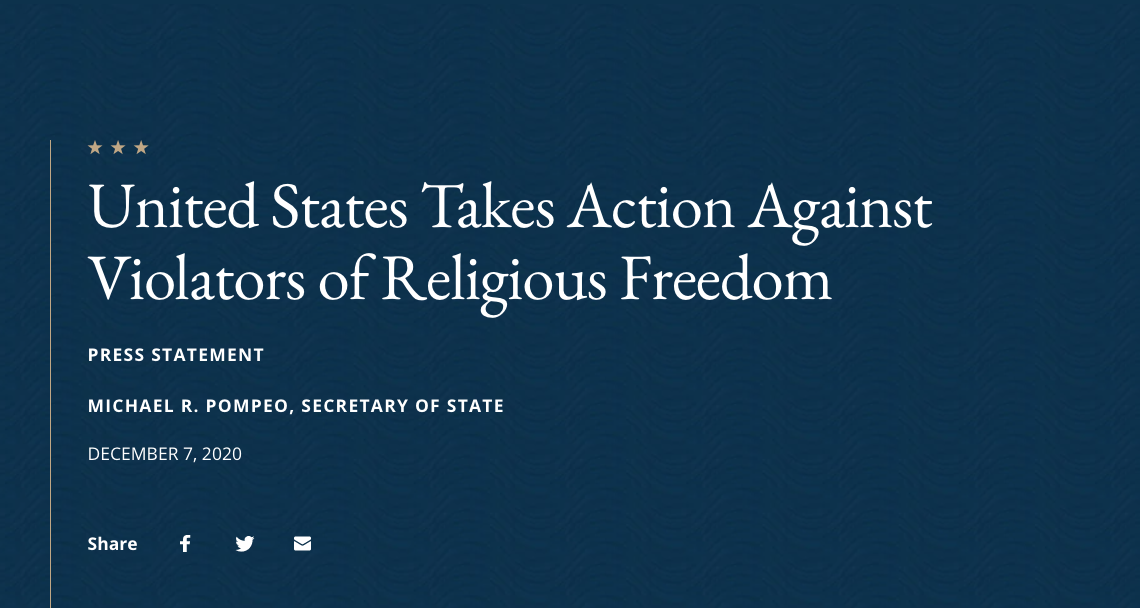 Religious freedom is an unalienable right, and the bedrock upon which free societies are built and flourish. Today, the United States – a nation founded by those fleeing religious persecution, as the recent Commission on Unalienable Rights report noted – once again took action to defend those who simply want to exercise this essential freedom.

The United States is designating Burma, China, Eritrea, Iran, Nigeria, the DPRK, Pakistan, Saudi Arabia, Tajikistan, and Turkmenistan as Countries of Particular Concern under the International Religious Freedom Act of 1998, as amended, for engaging in or tolerating “systematic, ongoing, egregious violations of religious freedom.”

We are also placing the Comoros, Cuba, Nicaragua, and Russia on a Special Watch List for governments that have engaged in or tolerated “severe violations of religious freedom.” Additionally, we are designating al-Shabaab, al-Qa’ida, Boko Haram, Hayat Tahrir al-Sham, the Houthis, ISIS, ISIS-Greater Sahara, ISIS-West Africa, Jamaat Nasr al-Islam wal Muslimin, and the Taliban as Entities of Particular Concern under the Frank R. Wolf International Religious Freedom Act of 2016.

We have not renewed the prior Entity of Particular Concern designations for al-Qa’ida in the Arabian Peninsula and ISIS-Khorasan, due to the total loss of territory formerly controlled by these terrorist organizations. While these two groups no longer meet the statutory criteria for designation, we will not rest until we have fully eliminated the threat of religious freedom abuses by any violent extremist and terrorist groups.

There are also positive developments to share. I am pleased to announce that Sudan and Uzbekistan have been removed from the Special Watch List based on significant, concrete progress undertaken by their respective governments over the past year. Their courageous reforms of their laws and practices stand as models for other nations to follow.

And yet our work is far from complete. The United States will continue to work tirelessly to end religiously motivated abuses and persecution around the world, and to help ensure that each person, everywhere, at all times, has the right to live according to the dictates of conscience.