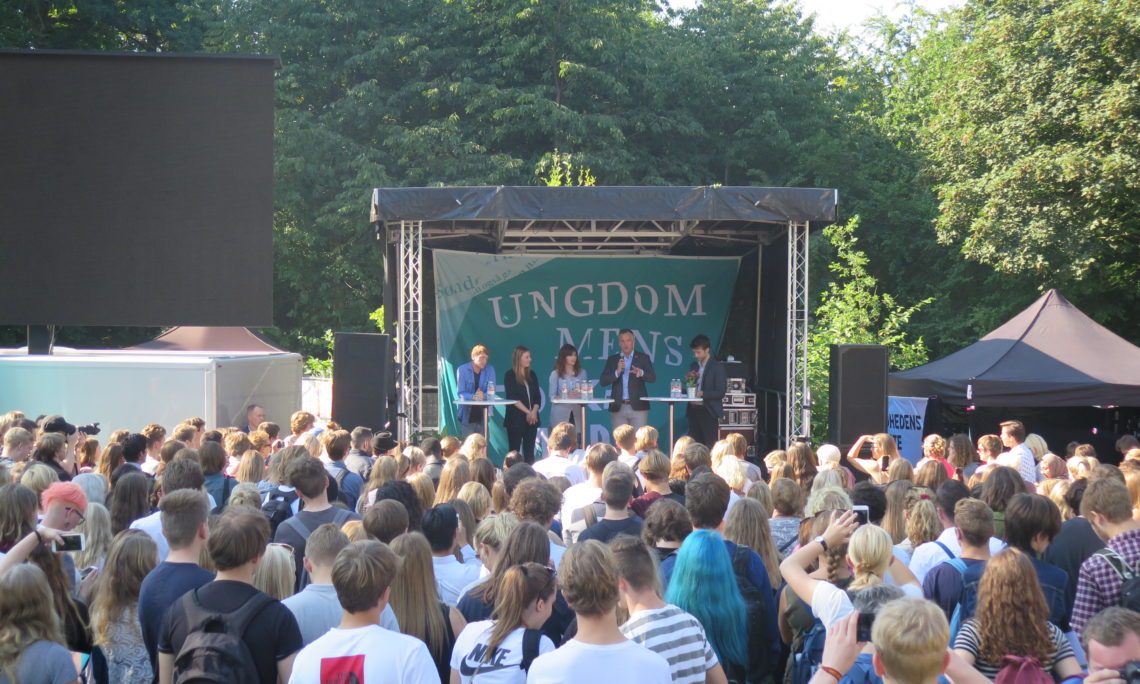 In September, the U.S. Embassy in Denmark took part in a celebration of democracy along with thousands of Danish Students.

The sun was shining bright over Søndermarken, Copenhagen. It was the early hours of the first ever Youth Folkemøde, also called UFM16, in Denmark. Thursday the 8th of September marked the first day of this very ambitious event. It was held as a celebration of democracy and democratic participation. The venue was set for two days of debate, deliberation, innovation and free thought. The “festival of democracy” was built around two main stages where a number of larger events, such as music and debates, took place, as well as smaller workshops that the attending organizations arranged. All of the attending organizations had set up stands in the festival site. Each stand had its own theme and purpose.

The U.S. Embassy had a stand in the middle of the festival site. The stand served as an information booth for those interested in American matters. Several sections of the embassy were contributing to the stand with one-hour presentations and Q&A sessions. The Danish students were especially keen on hearing about the climate debate in the U.S., health care policies and the upcoming election.

The election was also the main topic in one of the most popular events of the festival. Ambassador Rufus Gifford, took part in a debate and the following round of Q&A at one of the main stages. The other participants in the debate were three American students studying in Denmark, and they all had interesting points regarding the election. Judging by the questions from the hundreds of students attending the event, the debate had generated a major interest amongst the youth as well.

After the debate the embassy staff returned to the stand to answer more possible questions. The Ambassador visited different stands and took a well-deserved stroll around the festival site.

The second day of UFM16 was just as beautiful and sunny as the first. Once again thousands of Danish students were participating and attending different workshops and events.

The Ambassador had an early debate on gender equality to take part in while the embassy staff was taking care of the stand. After the debate, the embassy arranged a workshop on Countering Violent Extremism. Around 80 students participated in the workshop, which included discussions on what to do to counter extremism – as an individual, as a community and finally what the government could do.

After the workshop, the embassy had a presentation on Cyber Crime at the stand before the event came to an end.

Two days of successfully celebrating democracy and deliberation had come to an end. And even in the late hours of UFM16, the sun was still shining.