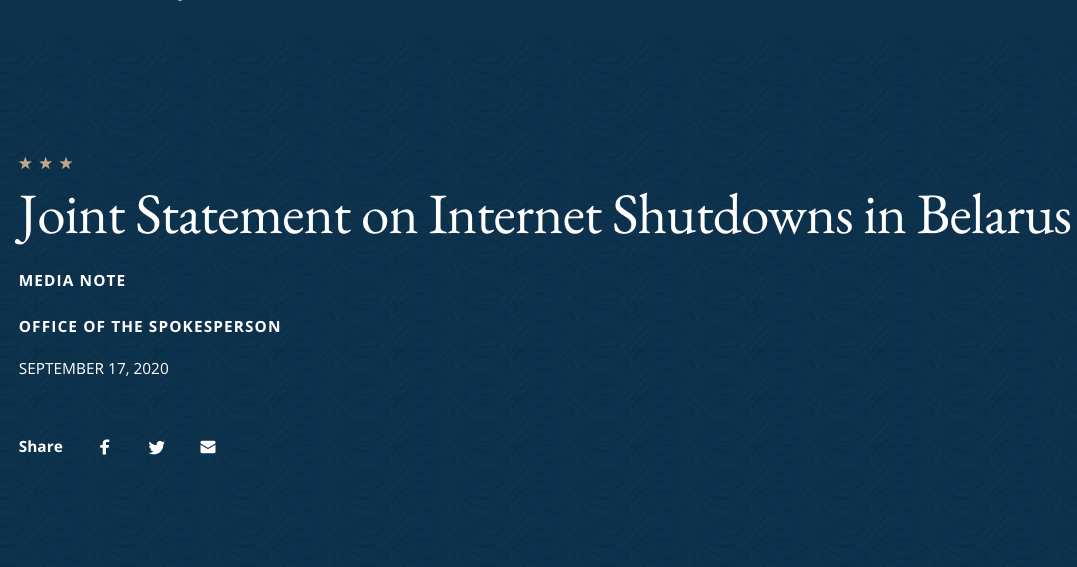 We, the signatories, are deeply troubled by and condemn the recently reported and ongoing use of partial and complete Internet shutdowns, as well as targeted content blocking, by the Government of Belarus in the aftermath of the fraudulent 2020 Belarusian presidential elections. Shutdowns and blocking or filtering of services unjustifiably limit the rights of peaceful assembly and freedoms of association and expression, especially when they lack procedural fairness and transparency. In conjunction with restrictive measures and intimidation employed against opposition candidates and the mass arrests and detentions of Belarusian civil society members and journalists, actions to limit access to the Internet, including social media and other digital communication platforms, further erode civic space. We will continue to stand with the people of Belarus, who are making their voices heard in spite of these oppressive measures, and we are especially heartened by the critical and central role women are playing in calling for fairness and accountability.

Civic space online is integral to a vibrant civic space off-line. Governments should not block or hinder Internet connectivity, as shutdowns often undermine human rights and fundamental freedoms, including the rights of peaceful assembly and freedoms of association and expression that form the basis of a democratic society. Internet shutdowns impact all users, especially marginalized groups and those in vulnerable situations. Shutdowns limit media freedom and the ability of journalists and human rights defenders to report on human rights violations or abuses and hold governments accountable. Shutdowns and restrictions also limit the dissemination and free flow of information, harm economic activity, contribute to social and political disorder, and negatively affect public safety.

Human rights must be protected online just as they are protected off-line. We call on Belarusian authorities to refrain from Internet shutdowns and blocking or filtering of services and to respect Belarus’s international human rights obligations, including under articles 19 and 21 of the International Covenant on Civil and Political Rights. We call on the Government of Belarus to respect civic space, including respect for human rights and fundamental freedoms, democracy and the rule of law.

Independent, transparent and impartial investigations into all allegations of human rights violations in the context of the election must be conducted and the perpetrators brought to justice.