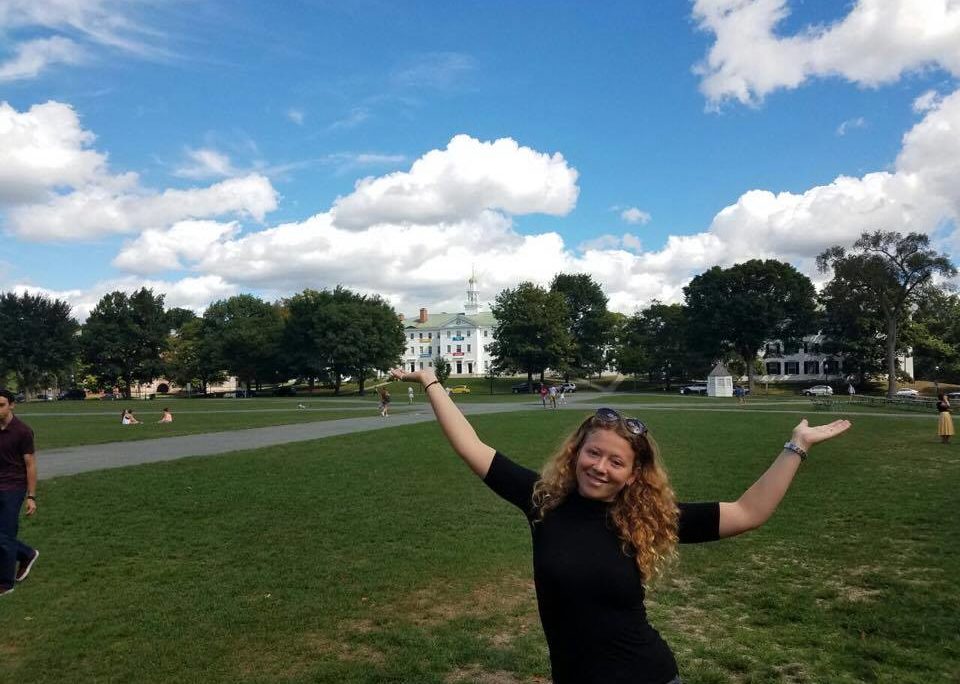 Frederikke S. Fürst at the Dartmouth Campus at the beginning of her year in the U.S. Courtesy photo

We have teamed up with Frederikke, a Danish student going to study for a year in the U.S. During her studies in the U.S. she will write about her experience as a Danish exchange student in the U.S. We hope you’ll read her stories and learn more about the unique experience an exchange is.

I’m on a plane heading to Boston. I am about to embark on a yearlong adventure to study at the prestigious Dartmouth College. The road here has been paved with tons of emails, papers to sign, forms to fill out and formalities to live up to. But before I get ahead of myself let me just introduce myself: My name is Frederikke. I’m 23 years old and I study Anthropology at the University of Copenhagen. Over the next ten or so months you can follow my life in The States – what cultural differences and similarities I experience between the U.S. and Denmark, what surprises and baffles me and everything in between that I find interesting and relevant to ponder over.

The process of getting here

Right from when I started university I knew I wanted to spend my exchange at an Ivy-league university, so when the time came I looked at Harvard and Columbia. But those schools, as I’m sure you know, are expensive to say the least. As university is free in Denmark it’s a foreign thought having to pay for your education and especially what it costs at an Ivy-league university. It being free also means that parents don’t save up for their kids’ university degrees and there isn’t a tradition of helping your kids out economically to the extend a year at an Ivy-league would mean. Thus, I would have had to indebt myself quite a bit to be able to afford it. But then someone told me about an exchange agreement between the University of Copenhagen and this place called Dartmouth that was supposedly an Ivy-league. Not that any of us had ever heard of it before. I checked it out and it in fact seemed to be a decent school. It wasn’t till I spoke to my American friend though that I fully realized how decent a school. So I decided that Dartmouth would be my first priority of places to go on an exchange. As it’s an exchange agreement between University of Copenhagen and Dartmouth you first have to apply to the former to even be allowed to send an application to the latter. I spoke to my institute and was told that this agreement only had three spots and several hundred applicants. It is one of the harder exchanges to get into. I worried for months after sending off my application to the University of Copenhagen in September last year but as I’m heading there now we all know how that story ended. The University of Copenhagen are the gatekeepers to Dartmouth. Once you’re through those gates it’s pretty smooth sailing there on out as long as you pass the mandatory TOEFL-test. You do have to send another application with an essay to Dartmouth but it rarely happens that the students appointed by University of Copenhagen to apply aren’t accepted. Because my year in the U.S. at Dartmouth is an exchange agreement, I don’t have to pay tuition which is a huge help. But that’s not to say that it isn’t extremely costly to spend a year there. The cost of housing, food, insurance, flights and living/having fun makes this an opportunity that unfortunately isn’t for everyone. I’ve applied for grants which has covered some of the expenses but since the economic crisis in 2008 a lot of grants are only given to masters students which has made getting funding more difficult. No doubt though that exchange agreements like this which Danish universities have loads of – I know people going to UCLA, Santa Cruz, Berkeley, Boston University, North Carolina, University of Houston just to name a few – make it way easier and more feasible economically to study part of your degree in America. As I mentioned earlier there is a ton of paperwork involved in getting these exchange agreements. That is something you have to be willing to spend time on, but I’m sure that once I get to Dartmouth it will all have been worth while.

I feel very fortunate to be here. Especially knowing how difficult it is to be accepted to Dartmouth – only about 10 % of applicants were accepted this year – and I hope you’ll stay tuned for more. I’m sure many fun anecdotes, mishaps and cultural differences will occur and make for, hopefully, interesting reading.