Home Home | News & Events | Statement on the Importance of the EU and U.S. Partnership for Security Telecommunications Infrastructure 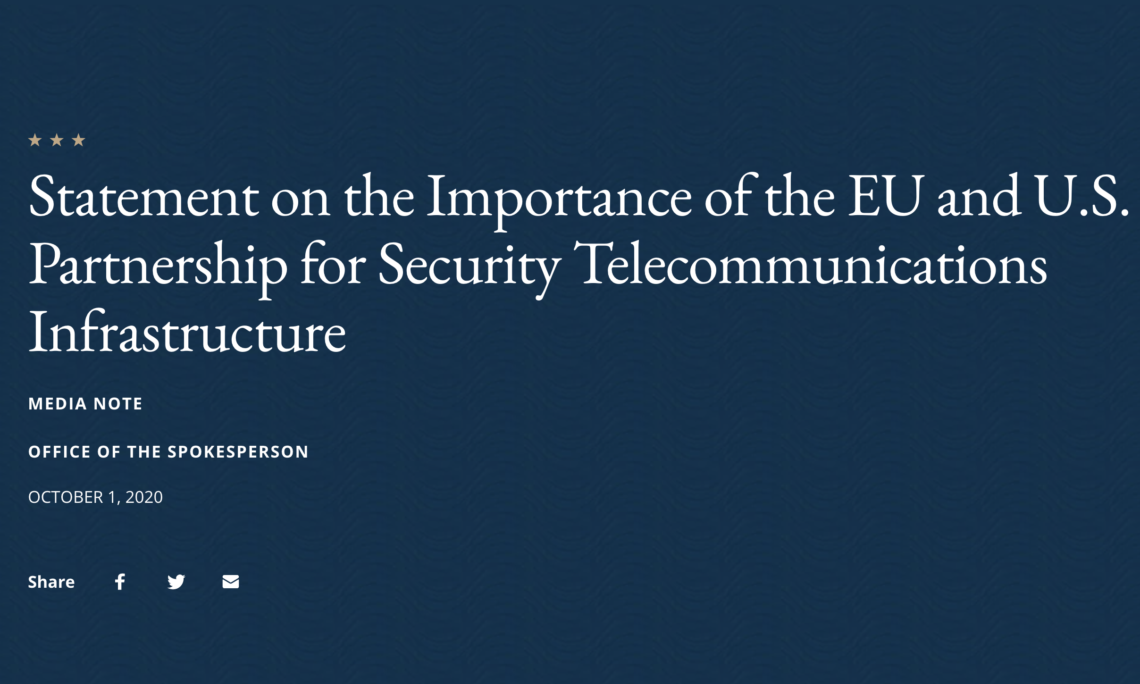 The text of the following statement was released by United States Under Secretary of State for Economic Growth, Energy and the Environment Mr. Keith Krach and European Commissioner for Internal Market Mr. Thierry Breton on the importance of the EU and U.S. partnership for securing telecommunications infrastructure.

Under Secretary Keith Krach and Commissioner Thierry Breton emphasized the importance of the European Union’s and the United States’ cooperation in securing telecommunications infrastructure and discussed ways to further advance U.S.-EU digital cooperation and ensure safe technology supply chains during their meeting on September 30 in Brussels, Belgium.

Under Secretary Krach and Commissioner Breton highlighted their commitment to shared principles on 5G security and the synergies between the EU 5G cybersecurity Toolbox and the Clean Network, which is rooted in internationally accepted digital trust standards.

Commissioner Breton shared that in January of this year, the European Commission, together with EU Member States, released the 5G cybersecurity Toolbox, noting that European 5G suppliers are likely to comply with it. The Toolbox further defines the criteria and gives clear measures to avoid the use of “high-risk” suppliers in the network, including the Radio Access Network. The 5G Toolbox serves as a reference for telco operators’ board of directors, who are required to make the decision on 5G suppliers. If they choose a high-risk 5G supplier and something happens, the board members may be liable.

On August 5, Secretary Pompeo launched the Clean Network, which is the State Department’s comprehensive approach to addressing the long-term threats to data privacy, security, and trusted collaboration posed by malign state actors. It is rooted in internationally accepted Digital Trust Standards and represents the execution of a multi-year, enduring strategy built on a coalition of trusted partners. The Clean Network emphasizes the importance of securing the entire 5G information technology ecosystem, including all extensions and accessories. Under Secretary Krach underscored that these efforts reflect a commitment to an open, interoperable, reliable, and secure global Internet based on shared democratic values and respect for human rights.

Both the Clean Network program and the 5G Toolbox emphasize the need to develop, deploy, and commercialize 5G networks based on the foundation of free and reciprocal competition, transparency, and the rule of law. Under Secretary Keith Krach and Commissioner Thierry Breton urge all stakeholders to carefully assess the long-term impact of allowing “high-risk suppliers” access – directly or indirectly – to their 5G networks when building their telecommunications infrastructure and services.