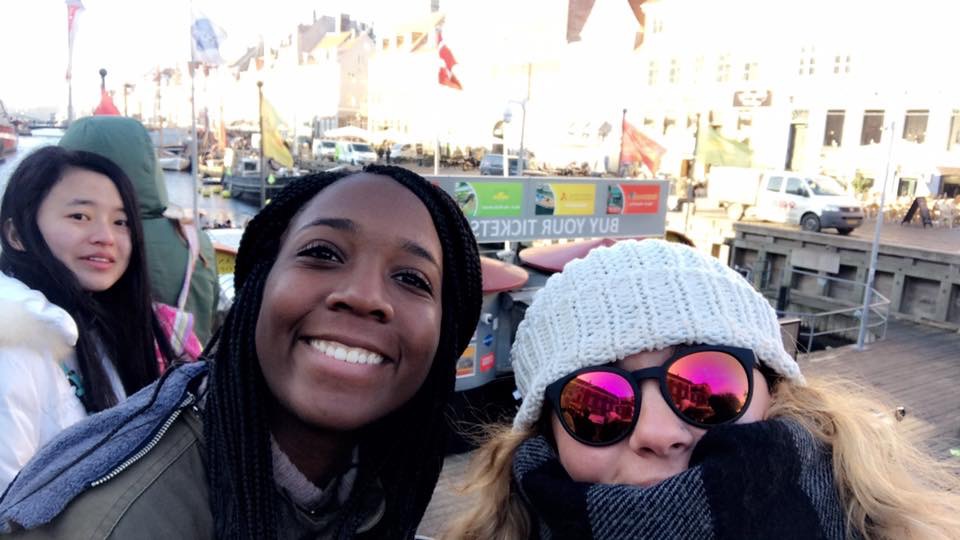 Ellen, me and Stephanie

We have teamed up with Simbi, an American student studying for six months in Denmark. During her studies in Denmark she will write about her experience as an exchange student. We hope you’ll read her stories and learn more about the unique experience an exchange is.

New is a word that can be used to describe when someone is either receiving something for the first time or is venturing out on an experience they never have been on before. This is how I would describe my first reaction to Copenhagen – new.

When I was searching for places to study abroad through my school at The University of Missouri, I was immediately attracted to the program offered in Denmark. It was Corporate Communication at the Danish School of Media and Journalism (DMJX). I’m not going to lie. Denmark was not something that had originally been on my radar but after seeing just a few pictures I fell in love with the idea of Copenhagen. After doing some actual research, I discovered a small gem in Europe that I would feel lucky to be a part of. We were offered to apply to either the campus in Aarhus or Copenhagen and I knew I would be happy with either program. But the Copenhagen campus felt right for me. Once I applied I became anxious to hear back and was afraid I wouldn’t get in. After weeks of waiting, I was accepted to study abroad through my school and into the program at the Copenhagen campus of the Danish School of Media and Journalism. But this was just the beginning of my journey.

I was to be attending the Danish School of Media and Journalism for six months. I’m not ashamed to admit this; I watched hundreds of YouTube videos to prepare myself for the upcoming months and the evident goodbyes I would have to say. It wouldn’t be the longest amount of time I’ve spent away from my family, but it would be the longest I would have been away from my friends and the home I’d made for myself over the past three years at The University of Missouri. My best friends came to visit me in my hometown before I left, I said my goodbyes to my sisters at home and hugged my parents for a “see you later” more than a goodbye at the airport.

This was something I wrote in my notes on the plane when I was feeling a little anxious to get to Denmark and I was sort of letting myself know that I needed to calm down:

“Thoughts can be a dangerous game when it leads to overthinking. Don’t let thoughts overtake everything until you end up losing to your own game for no other reasons than the simple trick of overthinking”.

My first two weeks were where it all felt the most foreign, but at the same time exciting. I was living at Copenhagen Downtown Hostel, which is near Strøget, until my dorm accommodation would be ready. I’m used to living in the suburbs or a college town so this was different for me. I remember checking in and when the guy at the reception read out loud how long I would be staying, he whistled and said “wow”. I remembered this being odd until I was meeting new people every three days and feeling weird lugging out my huge suitcase that contained my life for the next six months inside of it.

I found myself wandering in a country so much better than what I could have ever imagined. That opaque filter lifted and I was living out the life I had seen on YouTube.

Old friends. New friends. I was getting to know everyone a little better day by day once school started and I was introduced to all the other exchange students. I met people from America, but also The Netherlands, Germany, China, Israel, Mexico, Chile, Lebanon, and Australia. This was exciting to me because watching my friends study abroad before they were only with people they knew or people from the same school, which is fine but it just wasn’t the experience I craved. A big thing for me is that people can make wherever you’re at that much more special and I am lucky I’m surrounded by some of the best people I’ve ever met.

The hostel life wasn’t meant to be long term and while I was grateful for that experience to live in the city I was all too happy to move out. I began my descent to Herlev (which I was not able to pronounce for weeks but I finally have the hang of it). I moved there the day before my classes started at DMJX. I was happy to find that Herlev reminded me of home and the small suburb I grew up in my whole life.

I live in a dorm that some may consider far, but it’s my little oasis. There are thirteen of us from my school living there. I can’t tell you what I would do without having that group of friends there, when I’m not up to riding all the way to the city, to have cooking nights or chill nights with.

The dorm itself was an easy adjustment. I share a kitchen with other Danes who go to different schools around Copenhagen or who are working and they’re all wonderful as well, which makes living a little ways outside of the city that much easier.

That’s another big relief for me– how friendly the Danes are. It astounded me that since day one I found myself having genuine conversations and laughter with people from Denmark. The friendliness will never be forgotten and it’s a reason that wherever else I’ve traveled so far while being abroad I always say I love Denmark a little more because being around such genuine and friendly people all the time is something you don’t really get everywhere you go.

Each time I explore the city I’m reminded more and more why I decided to study in Denmark. We had a discussion in class recently where we had to share the best experience we have ever had. Mine was coming to Denmark and as cliché as it sounds I’ve truly found the person I am, and the person I want to be here. Three months in and the time of my life has just begun.