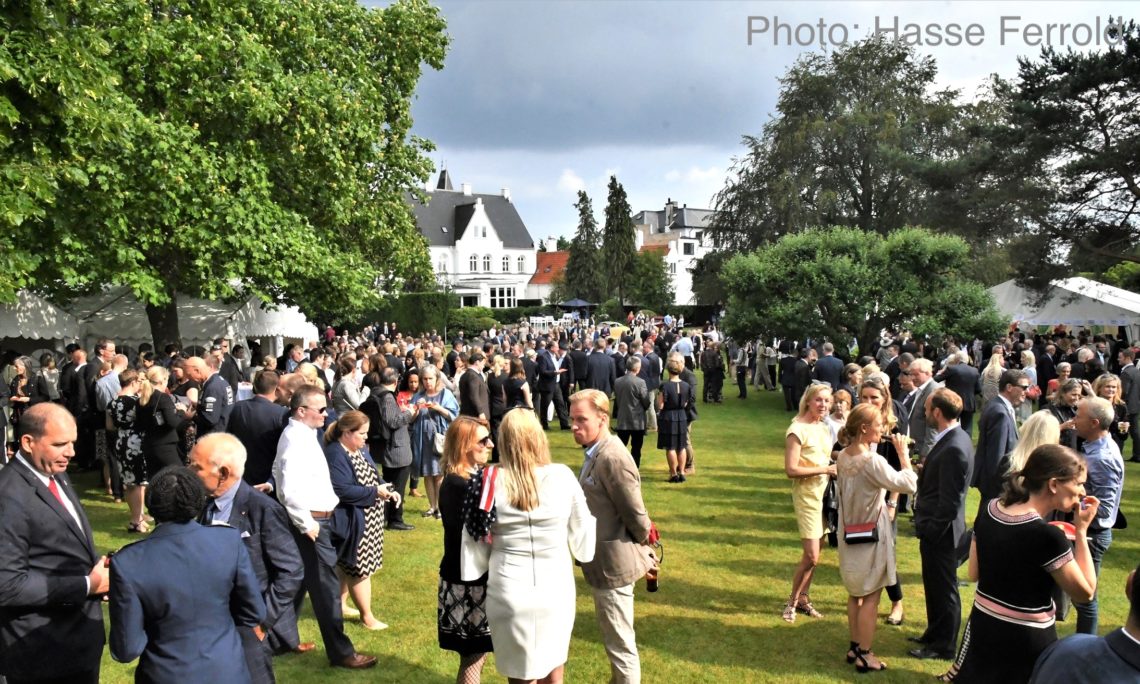 Your excellencies, ministers, ladies and gentlemen, friends and colleagues, welcome to Rydhave and happy Independence Day. Thank you for joining us to honor the day our forefathers pledged their sacred honor to the founding of the United States and the idea that liberty is man’s highest calling.

First, I would like to say to our friends, partners, and colleagues gathered here today, thank you. Thank you for the burdens and obligations you bear alongside us, thank you for your sacrifices, thank you for our mutual successes and for making our shared vision of a more democratic and peaceful world a reality. You are a part of all we have accomplished, from stronger security to more robust trade, and you are among the finest people—Danish, American, and many others—that I have ever worked with. A great American poet wrote, “The only way to have a friend is to be one.” America never loses sight of this and we will always be the best ally possible.

We are lucky to have inherited the blessings of an amazing transatlantic relationship and together we have shouldered tremendous responsibility and accomplished so much. Thanks to the brave Americans, British, Canadians and others who paid the ultimate sacrifice on the beaches of Normandy 75 years ago, the Nazi flag no longer flies above this beautiful house. D-day was the beginning of the end of fascist – socialist tyranny on European soil. And now, collectively, we are an economic, military, and cultural force unrivaled.

The obligation to defeat the Nazis was not a task for the timid, but we did not shrink from it. Prime Minister Churchill said of World War II, the first major modern conflict: “This [was] no war of chieftains or of princes, of dynasties or national ambition; it [was] a war of peoples and of causes.” He was correct. Our people banded together and freedom carried the day. I am reminded daily of their sacrifices and what we can achieve together when I see the Danish commitment to NATO in Afghanistan and this nation’s international efforts to export peace and security to the world’s most dangerous places. I thank those of you who help ensure that the brave young Danish men and women who fight alongside us have the vital resources they need to do their job and come home safely. America asked Denmark to fulfill its NATO commitments…as the Alliance asks of every member…and we are pleased that positive steps have been taken. While encouraging Denmark to meet its burden-sharing obligations, we simultaneously increased our contribution to the European Deterrence Initiative by billions of dollars. America never asks more than it is willing to give to protect our shared values and way of life. Our security is sacred. In fact, when President Trump was asked what he prays for, he answered, “peace.”

Peace and the blessings of liberty that accompany it cannot be wasted and we honor our veterans’ sacrifices by remembering what they fought for and secured in our name. Liberty and respect for human dignity are won by our soldiers, but they are powered through robust trade and open economies. The pathways to the wealth our nations enjoy were plowed with Marshall Plan tractors and they created the market infrastructure and capitalist systems that were a blessing to every nation fortunate enough to be on the free side of the Iron Curtain. Denmark and the other nations America helped in the spirit of goodwill and friendship became our strongest allies in the struggle against Soviet communism and the tyranny that enslaved hundreds of millions.
Capitalism has done more to raise billions out of poverty than any other force or idea in history. Free trade has not only opened markets, but opened minds, and underpins our shared prosperity and values. We live better today than the kings and queens of 100 years ago.

I still hear praise for redistribution of wealth and calls for government overreach into private markets. Have the lessons of the 20th Century already been forgotten? Free association and open commerce have powered the blessings our nations have given the world. In the words of Adam Smith, “If an exchange between two parties is voluntary, it will not take place unless both believe they will benefit from it.” We Americans and Europeans represent the largest trading block in history and we all know we have benefitted from it. Surprisingly, as the American economy booms to unprecedented levels, more voices focus on deriding the wealth of others than eradicating poverty. Rising economic tides lift every boat and market economies drive these tides. Poverty still exists in far too many corners of the world, but the answer is not redistributing wealth and envy, it is expanding markets, freedom of speech, honoring the rule of law, and respect for human rights. We cannot lean back, but we also cannot forget that capitalism brought us to a point where worldwide poverty and child mortality rates have been cut in half since 1990. From PEPFAR and combatting the scourge of AIDs to Danida’s admirable global efforts, open commerce and free trade finance the good we do.

Alliances, friendships, and sacrifices have given us much to be thankful for and together we have accomplished great deeds, but we cannot—as the Danes say—lean back in facing our obligations, nor can we let the lessons of the past be forgotten. We inherited freedom, security, free trade, respect for human rights and the rule of law, and these principles define our shared beliefs and form the bedrock of our relationship. They must be cherished and protected.
As allies, we have struggled together, we have learned together, and we have progressed together. It is an incredible honor to work alongside so many of you and I genuinely look forward to what we will accomplish in the coming years. When you look at where the world stood 75 years ago on D-Day, and look at how far we have come, it is clear that we are up to any challenge if we face it together. Former foes are now allies, old allies remain the closest of friends, and the world is a better place with more promise and hope than ever before.

I leave you with a short passage from my nation’s first President, George Washington, he said: “Liberty, when it begins to take root, is a plant of rapid growth.”
Thank you for helping the United States sow the seeds of liberty around the world. Our blessings are many, and our obligations great. But turning away from them or from liberty, the rule of law, and the sanctity of the individual will never be an option. This was true 243 years ago when we signed our Declaration of Independence with quill strokes heard around the world, and it is true now.

Thank you for working alongside us and thank you for your friendship. Happy Independence Day.