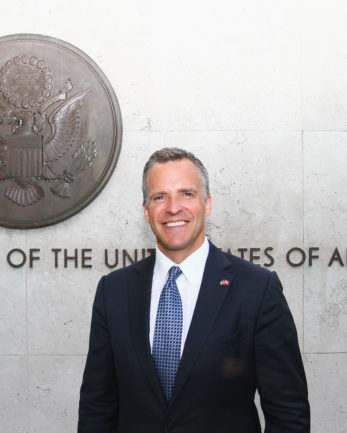 As someone never afraid of a challenge and willing to take risk with a smile, Former ambassador Rufus Gifford prides himself on looking to the future, wanting to do his small part to create a world which is more engaged, innovative, modern and secure.

Former Ambassador Gifford presented his credentials to HM Queen Margrethe II on September 13, 2013, thus becoming the 60th representative of the United States to the Kingdom of Denmark. As Ambassador, his mission was to transform a historically great relationship to meet the challenges of the future by engaging Danes – especially younger Danes – on issues that matter.  His three main priorities were enhancing trade and economic opportunity while combating climate change, making the world safer for all through security cooperation, and partnering with Denmark and Greenland in the Arctic region, especially as the United States assumes the Arctic Council Chair in 2015. The Former Ambassador firmly believes that Americans and Danes have a lot to learn from each other, and that our partnership has made and will continue to make a positive difference in the world.

Following graduation from Brown University in 1996, Ambassador Gifford left his native Massachusetts to pursue a career in the entertainment industry. In the years that followed, he helped produce such family blockbuster films as the Dr. Dolittle franchise and Garfield: The Movie.  In 2004, at the age of 29, Ambassador Gifford took the bold step to leave the entertainment industry and enter the world of politics. Two months into an unpaid internship on (now-Secretary of State) John Kerry’s Presidential Campaign, Ambassador Gifford was hired as the Deputy Finance Director for the Western States based in Los Angeles.

Following the 2004 election, Ambassador Gifford started his own political consultancy business and worked for numerous U.S. Senators and California politicians before meeting then-Senator Barack Obama in January 2007. He worked on President Obama’s 2008 Presidential race in California and moved to Washington, DC following Obama’s historic election. There he took the fundraising reins of the Democratic National Committee in 2009 as Finance Director. At the start of the 2012 election, Ambassador Gifford moved to Chicago to help launch the re-election campaign of the President. He served as a Senior Staff member and Finance Director of the campaign – ultimately responsible for its more than billion dollar budget.

An avid runner, cyclist, and sailor, Former Ambassador Gifford enjoys the outdoors. With his partner, veterinarian Dr. Stephen DeVincent, and dog Argos, he enjoyed exploring Danish parks, forests and coastlines during his time in Denmark. Together, Ambassador Gifford and Dr. DeVincent are focused on the preservation of human rights around the globe, fighting the effects of climate change, and the preservation of wildlife.