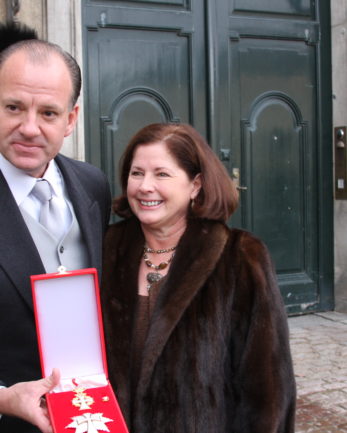 After a successful career in North Carolina spanning law, business and sports, James P. Cain was nominated by President Bush on June 30, 2005 to serve as America’s Ambassador to the Kingdom of Denmark.  Following confirmation by the U.S Senate, Ambassador Cain arrived in Denmark on August 14, 2005.

During his two and a half years in Denmark, Ambassador Cain has worked tirelessly to ensure that Denmark, one of America’s closest partners in working toward peace, security and prosperity around the world; remains firmly committed to active engagement on the global stage.

As Ambassador, Cain oversees the thirteen agencies of the American government that comprise the 150- person US Embassy in Copenhagen.  His energies have focused on areas of national security, counter-terrorism, alternative energy and energy security, commerce and investment, expansion of cultural ties, and promotion of shared values.

Utilizing his experience “selling ice hockey in the South”, Ambassador Cain is a strong believer in public diplomacy; in getting out of the Embassy and “Selling America”.  During his tenure he has committed himself to active engagement with the Danish public through both aggressive personal public outreach and media contact; highlighted by his 2500 km “ReDiscovey Tour” of Denmark.  This unique tour of the country by bicycle has brought the Spirit of America up close and personal to thousands of citizens throughout Denmark, and has resulted in unprecedented media coverage.  By last count, Ambassador Cain has appeared in over 600 articles, TV news shows and interviews since his arrival.

In seeking to enhance the strong bonds of friendship between America and Denmark, and working with the Danes to address the challenges of a globalized age, Ambassador Cain focuses on three primary topics in his public messages:  the need to encourage a spirit of Entrepreneurship and Innovation among young people, the Celebration of Cultural Diversity, and the culture-changing power of Private Philanthropy.

Drawing on his business background, Ambassador Cain has sought to create innovative ways to accelerate entrepreneurial engagement between America and Denmark.  He speaks widely on the topic across the country, and has organized and led numerous trade missions to promote increased collaboration among the public sector, private sector and academic sectors, most notably in the areas of National Security, Defense-related Manufacturing, and Alternative Energy technologies.  As a leader in alternative energy technologies, and as host of the 2009 UN Climate Conference, Denmark is on the front lines of the energy and environment challenge.  Ambassador Cain has worked to increase collaboration between the public and private sectors of our two countries in sustainable energy technologies.  In so doing, he has solidified America’s bond with Denmark as a viable partner in the climate and energy mandate.

Celebrating A Culture of Diversity

Having learned from his experiences in sports in America, Ambassador Cain is a firm believer in the power of team sports to change the lives of young people.  Using his relationships with the professional sports leagues in America, he has devoted significant energies to reinvigorating America’s Sports Diplomacy programs; with the specific goal of offering to young people a positive vision of a fully inclusive, multicultural society based on hope and opportunity.  From Street Basketball and Hip Hop clinics to a first-of-its kind “Sports for Life” week-long summer leadership camp, Ambassador Cain has brought team sports to the forefront of the integration challenge in Denmark.  His integration-through-sports efforts have not only touched the lives of thousands of young people in multiethnic neighborhoods, but have radiated outside of Denmark as well. Ambassador Cain has been invited to share his message of “The power of Sports” with audiences from Washington, DC to Johannesburg, South Africa.  He is now spearheading an effort to mobilize America’s diplomatic resources to return Baseball, “America’s Sport”, to the Olympic Games.

Pursuing the Diplomacy of Deeds

One of Ambassador Cain’s most satisfying initiatives has been to encourage the spirit of social compassion within the private sector in Denmark.  He spearheaded the creation of a new entity, the “United Hearts Foundation” to combine the “American Spirit” of private-sector social responsibility with the “Danish Spirit’ of social compassion.  In its inaugural Gala in the Winter of 2008, the effort raised over $600,000 in a Danish-American collaboration to launch the “Sports for Life” summer leadership camp for ethnic young people.  It was the most successful private fundraising event ever held in Denmark, and is poised to become an annual tradition.

Ambassador Cain has served in Denmark at a time of increased tension from a globalizing culture.  He has worked with Denmark through its most serious foreign policy challenge since WWII, the “Mohammad Cartoon Crisis”, helped to guide our partnership on the battlefields of Iraq and Afghanistan, worked to ensure our law enforcement and intelligence agencies collaborate to battle Al Qaeda linked terror cells in Denmark that threaten our common security, and worked to ensure that Denmark’s foreign aid and security policies are closely aligned with America’s policy priorities.  As testimony to the strong bonds of friendship, in the past 12 months Ambassador Cain has joined President Bush in hosting Denmark’s Prime Minister in private meetings at both the Presidential Retreat at Camp David, Maryland and the President’s private ranch in Crawford, Texas; one of only a few heads of state to receive such an exclusive invitation in the past decade.

Prior to his diplomatic appointment, Ambassador Cain had distinguished careers in law, business and sports, serving most recently as President and Chief Operating Officer of the National Hockey League Carolina Hurricanes.  He stepped down after the Team went to the Stanley Cup Finals in 2002.  Long active in community service, Ambassador Cain has been honored by his community as “Business Leader of the Year”, received the “John Ross Leadership Award”, and was recognized with the “National Outstanding Community Service Award” from the American Diabetes Association. Ambassador Cain and his wife Helen have two daughters, Cameron and Laura.

Ambassador Cain departed Copenhagen on January 24, 2009 after having received the Grand Cross of the Order of the Dannebrog during his farewell audience with HM Queen Margrethe II of Denmark.