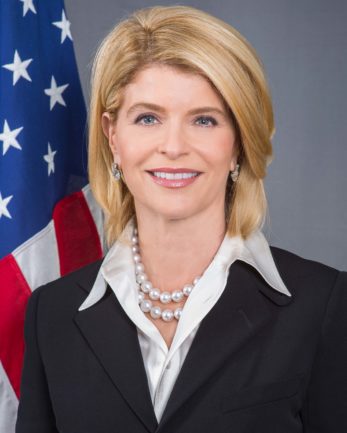 Ambassador Carla Sands was confirmed by the United States Senate on November 2, 2017 as the U.S. Ambassador to the Kingdom of Denmark.

Prior to her appointment, Ambassador Sands had a diverse career in the entrepreneurial, investment, and philanthropic sectors, with a focus on real estate, community service and education. As Chairman of Vintage Capital Group, LLC, she also served on President Trump’s Transition Finance Committee and Economic Advisory Council in 2016, and was the California Delegate for the 33rd Congressional District to the 2016 Republican National Convention.

A strong supporter of arts and education, Ambassador Sands has served on the boards of Pepperdine University, the Los Angeles Museum of Contemporary Arts, the California Cultural and Historical Endowment, the Library Foundation of Los Angeles, and the Los Angeles Philharmonic, among others. She was also the President and Chairman of the Blue Ribbon, an organization that supports the Los Angeles Music Center and produces the Children’s Festival each spring. She also served on the Board of Visitors of the UCLA School of Arts and Architecture.