Home Home | Our Relationship | Alan Leventhal U.S. Ambassador to the Kingdom of Denmark 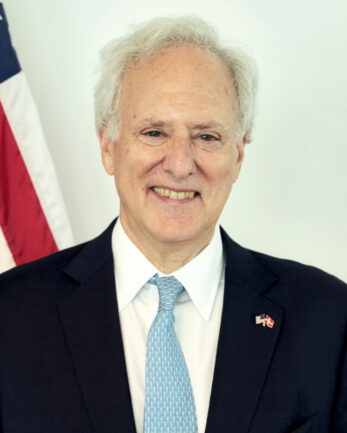 Alan Leventhal was credentialed as the United States Ambassador to the Kingdom of Denmark by Her Majesty Queen Margrethe II on July 1, 2022.

Leventhal is the former Chair of the Board of the Damon Runyon Cancer Research Foundation where he also served on the Executive Committee. He was an Executive Committee and life member of MIT and Trustee Emeritus of Boston University where he had served as Chair from 2004 to 2008. Leventhal was a life trustee of Northwestern University and also served on the boards of the Friends of Post Office Square and the Norman B. Leventhal Map and Education Center at the Boston Public Library.

Leventhal received his Bachelor’s degree in Economics from Northwestern University and a Master of Business Administration from Dartmouth College. He is married to Mrs. Sherry Leventhal of New Orleans, Louisiana, and together they have six children and 12 grandchildren.