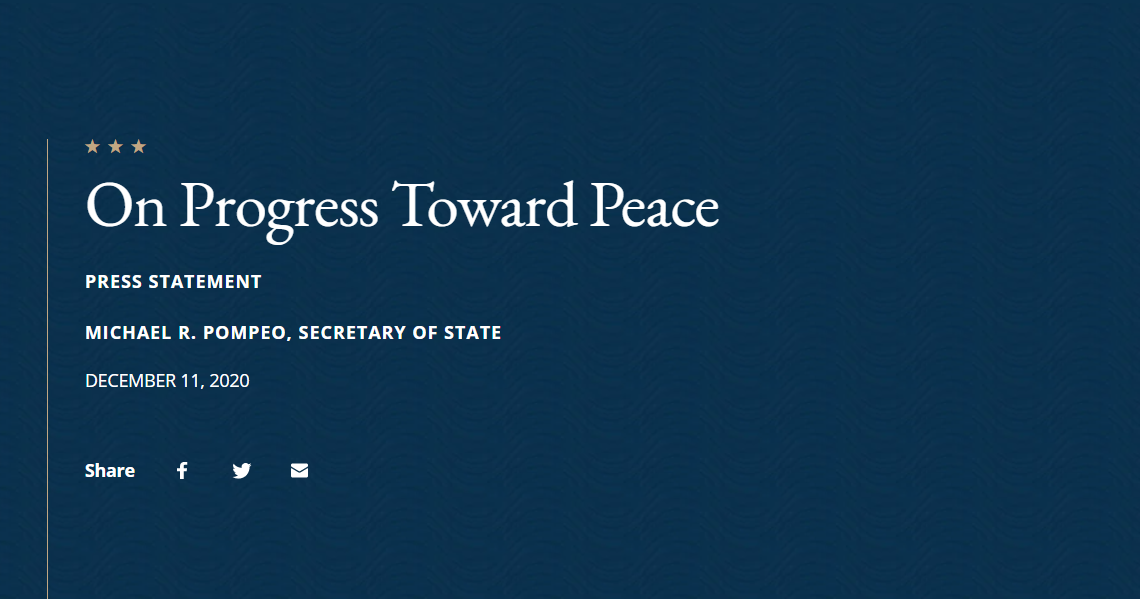 On Progress Toward Peace

The agreement reached yesterday between Israel and Morocco to normalize relations is another remarkable step toward peace. In the coming weeks, Israel and Morocco will assume full diplomatic relations. This agreement will also grant overflights and direct flights to and from Israel and will promote unfettered economic cooperation between Israeli and Moroccan companies. This significant step is the result of the hard, diplomatic work of many who have devoted their time and expertise to achieving an outcome that benefits both parties. I want to recognize the incredible efforts made by the professionals here at the Department of State who along with Special Advisor Jared Kushner have worked tirelessly to move the region beyond conflicts of the past.

In 1777, Morocco was the first country to grant diplomatic recognition to the United States of America. That same year, Morocco opened its ports to the ships of the new American republic, allowing us to engage in trade and commerce and supporting our fight for freedom. Our friendship has endured. Today, together with Israel and Morocco we are declaring to the world that we are focused on unlocking the potential of all our citizens to ensure the continued prosperity and security of our countries.

President Trump has also recognized Moroccan sovereignty over Western Sahara. The United States continues to believe only political negotiations are capable of resolving the issues between Morocco and the POLISARIO. As we have long stated, we believe those negotiations should occur within the framework of Morocco’s autonomy plan.

Morocco’s efforts to promote tolerance – from its historical tradition of protecting its Jewish minority, the signing of the Marrakech Declaration, to yesterday’s agreement with Israel – sets an example to the region and throughout the world. There is a powerful verse in the Scripture that reads “a harvest of righteousness is sown in peace by those who make peace.” The United States, Israel, and Morocco have embraced peace and the world is better off for it.