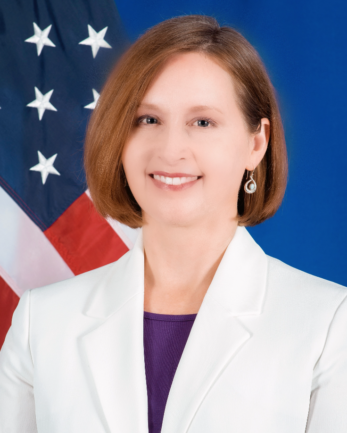 Jennifer Hall Godfrey became Deputy Chief of Mission at the U.S. Embassy in Denmark in July 2022.

Ms. Hall Godfrey is a career member of the Senior Foreign Service. She joined the Department of State as a public diplomacy officer in 1998, and served overseas in Jordan (1999-2001), Turkmenistan (2002-2004), Libya (2007-2009), Austria (2010-2013), and Saudi Arabia (2015-2018). In Washington, she served as Press Officer in the Bureau of International Organization Affairs (2004-2006), as Deputy Director and then Acting Deputy Assistant Secretary for International Media Engagement in the Bureau of Public Affairs (2014-2015), and as Executive Assistant/Chief of Staff to the Under Secretary for Public Diplomacy and Public Affairs (2018-2021). On January 20, 2021, she was delegated the functions and authorities of the Under Secretary for Public Diplomacy and Public Affairs, and served in that role until April 2022.

Ms. Hall Godfrey earned a B.A. from Brandeis University and an M.S. in National Security Strategy from the National War College. She speaks Arabic, Russian, and Spanish.