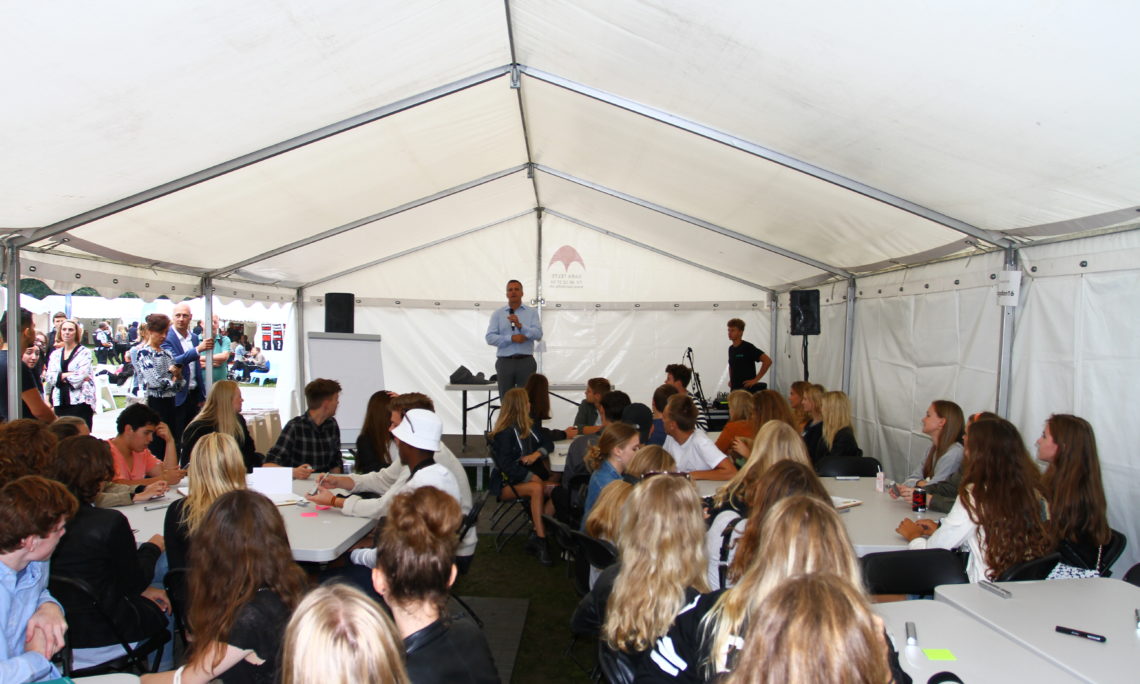 The U.S. Embassy organized a workshop on counter-radicalization for approximately 90 young Danish pupils in the age of 15-20 at the Youth Folkemøde. The intention of the workshop was to open a dialogue on violent extremism and radicalization with the participants and discuss what initiatives can be taken to prevent these unfortunately very relevant and important problems.

Ambassador Gifford initiated the workshop by explaining the necessity to discuss extremism and why it is important to develop strategies that effectively counter violent radicalism. He  discussed the broad nature of extremism. He mentioned groups such as the Ku Klux Klan and ISIS and individual examples such as Anders Bering Breivik. Ambassador Gifford noted that, understanding of what the individual experienced on a daily basis could make better programs with partners in Denmark and throughout the world.

Governments and organizations around the world are determined to prevent the process of radicalization and stop people from becoming violent extremists. The programs that Århus Kommune has developed, for instance, focus on helping and re-integrating radicalized people into society.

The Ambassador stressed the importance of having approaches that function at a community level. This approach has been proven to be the most successful in terms of limiting radicalization.

The discussions conducted at the workshop by the participating students and the feedback the Embassy received was highly relevant. The students’ knowledge and thoughts about what leads to extremism and radicalization provided us with many good ideas about how to tackle this problem.

Tolerance as a key factor in counter-radicalization

We asked the students to reflect on and discuss what could be done as an individual to counter extremism. It was suggested by the students that being tolerant towards people of other ethnical or cultural backgrounds is important. It was also deemed important to actually care for each other. If a friend or classmate seems to be on a radicalization path, the students advocated speaking to that person, including that person in social activities, basically making sure the person was part of the broader community. Especially if they were part of a different ethnic group than yourself. The students also stressed importance of speaking out against radical behavior. For example mustering the courage to speak out against someone verbally abusing someone else on public transport.

When the students were asked what could be done on a society or community level, each table provided a broad range of solutions. One of the many solutions was to pay more attention to the weaker groups of the population, since they are often marginalized and easier to radicalize. It was suggested that municipalities could arrange events where different ethnicities, religions etc. could meet and learn more about each other. Similarly, communities should arrange social activities that include all aspects of society, making sure vulnerable groups were included.

The student also noted that urban planning could play a role in counter-radicalization. They suggested looking at how housing areas are constructed, noting that these areas should be made in a way that made them attractive to many different types of people.

Lastly the students took issue with the role of the media, noting that the media can be very influential and potentially fuel a radicalization process.

When the students were asked about what governments could do to counter extremism, they mentioned entering into a dialogue with religious leaders as an example to avoid radicalization, since it will generate a fundamental understanding of ones differences and worldviews. In a similar vein, the students also suggested more education in school on cultural diversity and cultural differences as a way to counter prejudice and hatred. Another aspect the students