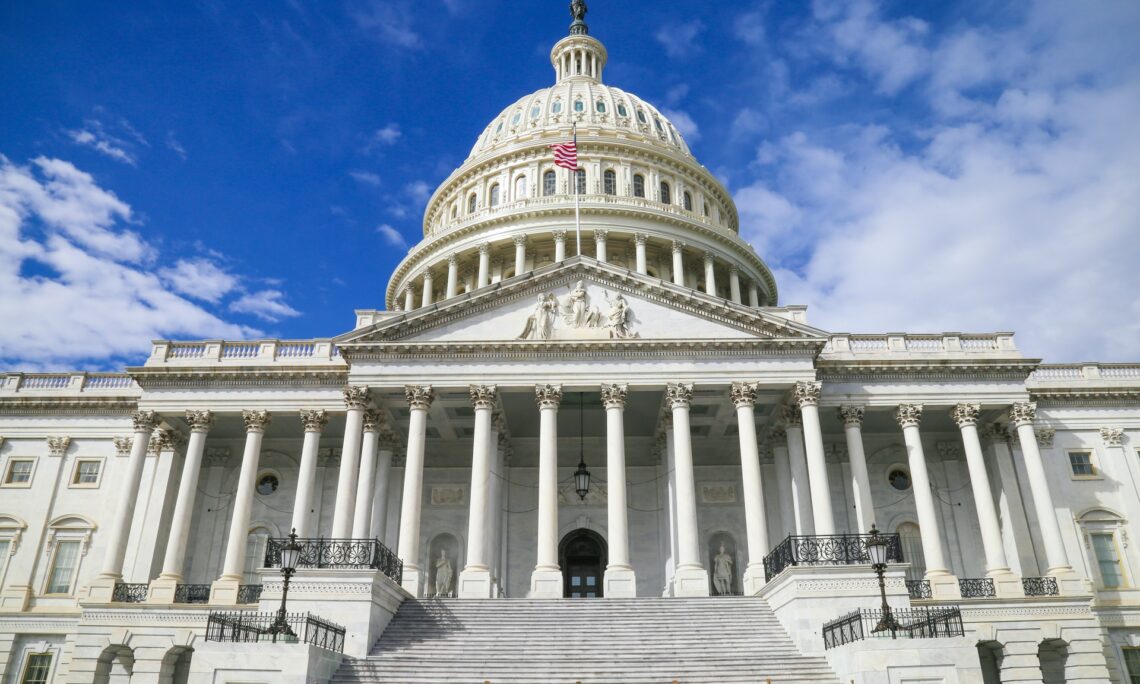 The U.S. Congress in Washington D.C. Photo by Louis Velazquez on Unsplash.

Congress: The Senate and House of Representatives

While the President functions as the executive power in the United States, the legislative power lies with the Congress. In this section you can read about how Congress is structured and how elections for Congress work.

The Congress is the national parliament in the U.S. It is divided into two chambers: the Senate and the House of Representatives. Here, politicians are elected from all of the 50 states in the U.S. In Denmark there is only one chamber in the parliament. That is Folketinget. Denmark used to have two chambers as well, until Landstinget closed after a constitutional amendment (grundlovsændring) in 1953.

A bill must receive a majority of the votes in both chambers of Congress for legislation to be passed in the U.S. You can learn more about this on our page about the legislative process.

In the Senate, there are two representatives from each state. That is a total of 100 Senators. That means that the same number of Senators represent the least populated state of Wyoming as the most populated state of California. To illustrate the contrast, Wyoming has only 0,5 million inhabitants, while California has 39 million.

As with the presidential election, being elected Senator is a long process. Primary elections are held in spring in each state where the parties decide which candidate is going to represent them at the election. In several states the primary election is the most decisive because either the Republicans or Democrats have such a strong hold on some states that the candidate they choose to represent them will be a certain winner of the actual election. At the election it is the candidate that gets the most votes that will become one of the states two Senators.

The other chamber in Congress, the House of Representatives, consists of 435 members. The House also contains an additional 6 representatives of American territories (including Washington D.C. and Puerto Rico). However, these are not allowed to vote. Out of these 435 seats, each state has a certain number of representatives, based on their population size. Each seat in the House corresponds to approximately 750,000 people. Thus, a state with 7.5 million inhabitants would have 10 seats in the House. Consequently, the smallest states only have one seat in the House, while California has 53 seats. The number of seats allocated to each state is up for evaluation every 10 years, when the U.S. Census Bureau (comparable to Danmarks Statistik) conducts a Census for the entire United States. The total number of seats must always equal 435 though.

In order to run for office a candidate must be at least 25 years of age. Additionally, a candidate must have been a U.S. citizen for at least 7 years. Candidates also have to be residents of the state (but not necessarily the congressional district) in which they are running for office.

Elections for the House are held every two years, but, in contrast to the Senate, every member of the House is up for re-election each time. Thus, members of the House only serve two year terms. Every state has the same number of congressional districts as it has seats in the House. Congressional districts each consist of approximately 750,000 people. The candidate who receives the most votes in each district gets to represent the district in the House.

In the next section, we will dive into the American legislative process. In doing this, we will elaborate on the function of the U.S. Congress and its chambers and touch upon the overall role of Congress in the U.S. political system.