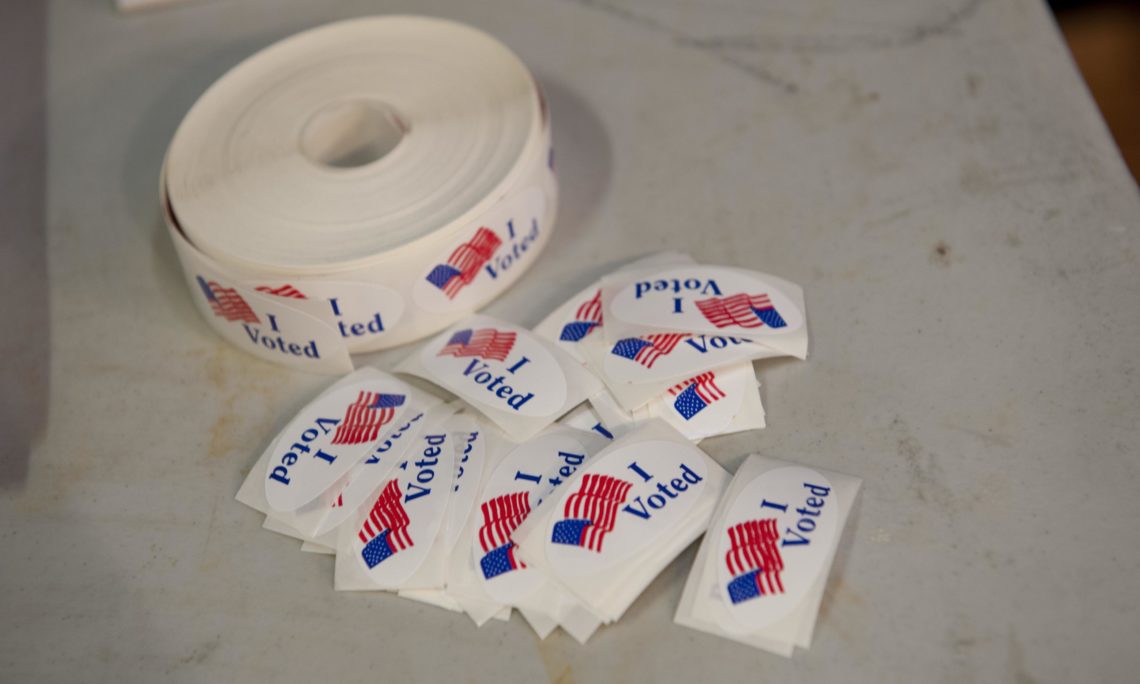 "I voted" stickers. Photo by: U.S. Department of State

One of the most important rights of American citizens is the franchise — the right to vote. Originally under the Constitution, only Caucasian male citizens over the age of 21 were eligible to vote. This injustice has been corrected and voting rights have been extended several times over the course of our history. Today, citizens over the age of 18 cannot be denied the right to vote, regardless of race, religion, sex, disability, or sexual orientation. However, in every state except North Dakota, citizens must register to vote, and laws regarding the registration process vary by state.

The path to full voting rights for all American citizens was long and often challenging. The franchise was first extended to African Americans under the Fourteenth and Fifteenth Amendments to the Constitution, passed during the Reconstruction period after the Civil War. These guaranteed that all male citizens, regardless of their race, would receive equal treatment under the law and not be deprived of their rights without due process. The Fifteenth Amendment is specifically dedicated to protecting the right of all citizens to vote, regardless of their race.

For practical purposes, this was not the end of the voting rights struggle for African Americans. Because of widespread discrimination in some states, including the use of poll taxes, grandfather clauses, and literacy tests, African Americans were not assured full voting rights until President Lyndon Baines Johnson signed the Voting Rights Act in 1965.

Women were denied the right to vote until 1920, when the Nineteenth Amendment was passed. Prior to that, women had only been able to vote in select states.

Federal elections occur every two years, on the first Tuesday after the first Monday in November. Every member of the House of Representatives and about one-third of the Senate is up for reelection in any given election year. A presidential election is held every fourth year.

Federal elections are administered by state and local governments, although the specifics of how elections are conducted differ between the states. The Constitution and laws of the United States grant the states wide latitude in how they administer elections.

The Electoral College is one of the most difficult things to explain to foreigners about the US election system. The Electoral College is not a place, but rather a group of people. When choosing a president, the people of the United States vote for electors, who then vote for the president. Each state is allocated a number of electors equal to the number of its U.S. senators (always two) plus the number of its U.S. representatives. Currently, the populous state of California has 55 electors, while a state with fewer residents, such as North Dakota, might only have three or four.

The Electoral College now consists of 538 electors. A majority of 270 electoral votes is required to elect the president and vice president.

The U.S. Constitution contains very few provisions relating to the qualifications of electors. Article II provides that no member of Congress “or Person holding an Office of Trust or Profit under the United States” shall be appointed an elector. The process for selecting electors varies state by state. Generally, state political party leaders nominate electors at their state party conventions or by a vote of the state party’s central committee. Electors are often selected to recognize their service and dedication to their political party. They may be state-elected officials, party leaders, or persons who have an affiliation with the presidential candidate.

The electors in each state meet on the first Monday after the second Wednesday in December to select the president and vice president of the United States.

The Electoral College vote totals determine the president and vice president, not the statistical plurality or majority a candidate may have in the nationwide popular vote totals. Five times in U.S. history – 1824, 1876, 1888, 2000, and 2016 – the candidate who collected the most popular votes nationwide failed to win the majority of electoral votes.

No constitutional provision or federal law requires electors to vote in accordance with the popular vote in their state. But some state laws provide that so-called faithless electors be subject to fines or be disqualified for casting an invalid vote and be replaced by a substitute elector. The U.S. Supreme Court has not specifically ruled on the question of whether pledges and penalties for failure to vote as pledged may be enforced under the Constitution. No elector has ever been prosecuted for failing to vote as pledged.

Opinions on the viability of the Electoral College system may be affected by attitudes toward third parties – ones other than the Democratic and Republican parties. Third parties have not fared well in the Electoral College system. In 1948 and 1968, third-party candidates with regional appeal won blocs of electoral votes in the South, which may have affected the outcome but did not come close to seriously challenging the major party winner. The last third-party candidate to make a strong showing was former Republican President Theodore Roosevelt in 1912. He finished a distant second in electoral and popular votes (taking 88 of the 266 electoral votes then needed to win). Although Ross Perot won 19 percent of the popular vote nationwide in 1992, he did not win any electoral votes since he was not particularly strong in any state.

Did you find the texts about the U.S. election system interesting?

If so, you might want to take a look at this book. You can download it as a pdf. file for free, just click here (PDF 3.8 mb).