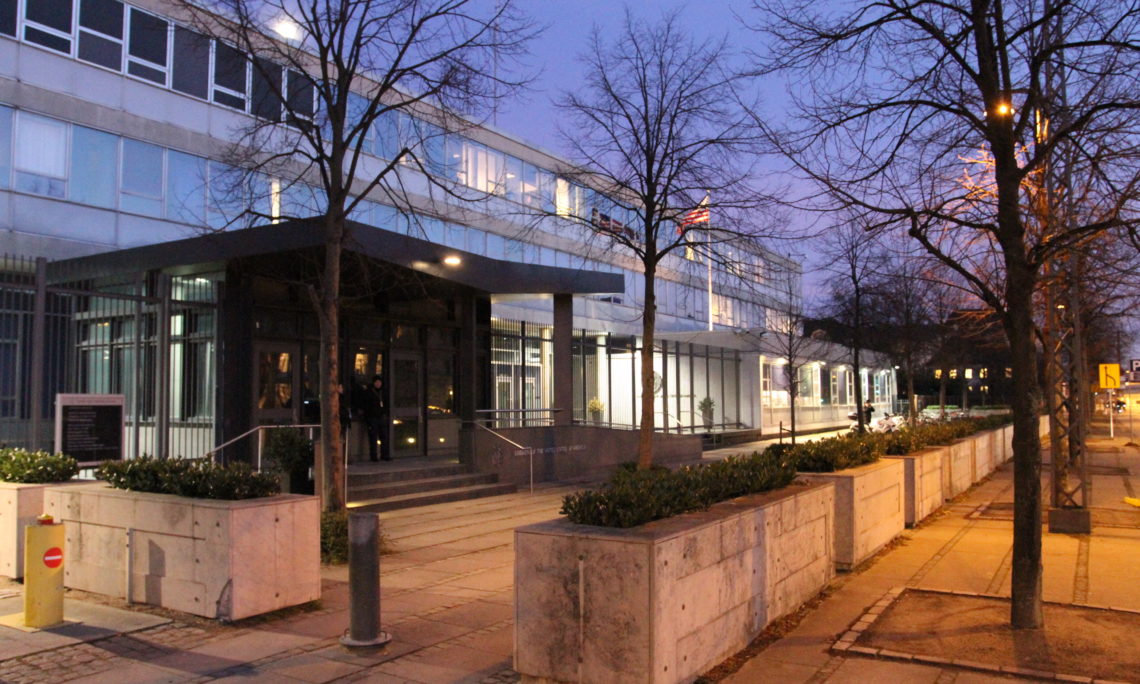 Want to know more about the US Embassy in Copenhagen and what goes on there? You’ve come to the right place.

The Department of State has several different sections at the Embassy. The Executive Office which houses the Ambassador and the Deputy Head of Mission and their support staff; the Political and Economic Section, the Public Affairs Section, the Regional Security Office and the Consular Section. Apart from that, there are also large Management and General Services sections that make sure the Embassy runs smoothly.

The Embassy also houses the procurement office for the U.S. Air Force Base at Thule, Greenland.

The current American Embassy building in Copenhagen, Denmark, opened on May 27, 1954. It was planned and built under the direction of Ides van der Gracht, Regional Director for the Foreign Buildings Office of the U.S. State Department.

The Danish supervising architects for the building were Jørgen Juul Møller, M.A.A., and Erik Herlow, M.A.A., both of Copenhagen.

Denmark and the United States have never experienced an interruption in their diplomatic relations since they were first established in 1801. In 1917, Denmark sold the Danish West Indies in the Caribbean Sea to the United States; the islands are now known as the U.S. Virgin Islands. In 1949, Denmark became one of the charter members of the North Atlantic Treaty Organization (NATO).

Danish Recognition of the United States, 1792.

Denmark recognized the United States when the U.S. consul at Copenhagen, Hans Saabye, received an exequatar from the Danish government on or about June 9, 1792.

Consular relations were established on or about June 9, 1792, when the U.S. consul at Copenhagen, Hans Saabye, received an exequatar from the Danish government.

Diplomatic relations were established on October 12, 1801, when the Danish Minister Resident to the United States presented his credentials to the U.S. government.

The U.S. Legation at Copenhagen was established on September 20, 1827, when Chargé d’Affaires Henry Wheaton presented his credentials to the Danish government.

The U.S. Legation at Copenhagen was closed on December 20, 1941, following the outbreak of war between the United States and Germany. German forces had occupied the city on April 9, 1940 and U.S. Minister Ray Atherton left Copenhagen on June 5, 1940. Atherton subsequently took up residence in Ottawa, Ontario, Canada as U.S. Minister to Denmark’s government, which remained in Danish hands until German authorities seized complete control in August 1943.

On June 16, 1945, the U.S. Legation at Copenhagen was reopened following Denmark’s liberation from German occupation during World War II.

The Legation at Copenhagen was raised to an Embassy on March 18, 1947, when Ambassador Josiah Marvel, Jr. presented his of credentials to the Danish government.

The Public Affairs Section (PAS) of the American Embassy in Copenhagen is responsible for delivering information to the Danish public about the United States, its government and its policies, and about America’s institutions and its people and culture. As part of this role, the Section’s officers serve as the Embassy’s official press spokesmen.

In addition, the Section organizes conferences, seminars and talks by visiting American officials and academics, as well as electronic meetings of American and Danish counterparts. As part of the Embassy’s overall outreach efforts, the Section manages speaking programs by other Embassy officers, and invites groups to the Embassy for presentations by American officers.

The Section also manages a variety of educational and cultural exchanges — both short-term and long-term — that allow Danish students, academics, and professionals to visit the United States, and for Americans to visit Denmark. As part of this work, the Section maintains an active International Visitor and Voluntary Visitor program, which arranges study trips and professional appointments for Danish visitors to the United States. The Section also works closely with the Danish Fulbright Commission, which enables Danish and American students and faculty to study in America and Denmark.

The Consular Section of the American Embassy provides assistance to American citizens residing in or visiting Denmark and visa services for temporary visitors and immigrants to the United States.

If you want to study in the US either during high school or later in university you’ll need to contact the Visa Unit. If you one day get a job that takes you to the US you’ll also get to know the Visa Unit.

The combined Political/Economic Section is responsible for the conduct of bilateral relations with the Danish Government on political and economic policy matters. The Section also works with the Danish Government on the full range of transatlantic issues. In addition, the Section ensures that U.S. Department of State and other U.S. government agencies are aware of significant political and economic developments, including domestic developments in Denmark, Greenland and the Faroe Islands. Another responsibility is to coordinate U.S. and Danish positions with respect to multilateral fora.

The Political/Economic Section maintains official contact with Danish government departments, members of parliament, political parties and the devolved Faroes and Greenland Home Rule governments as well as interested non-governmental organizations. These contacts are used to advocate policy consistent with U.S. interests, assess the degree of support for U.S. policies, and maximize cooperation with the Danish Government in areas of mutual concern.

Some of the specific issues handled by the Political/Economic Section include:

The Office of Defense Cooperation (ODC) Denmark is responsible to the U.S. Ambassador and the U.S. European Command for administering U.S. Security Assistance and Defense Cooperation in Armaments Programs, and reinforcing defense logistics planning activities for Denmark.

Security Assistance includes Foreign Military Sales (FMS) of U.S. defense equipment and training, and management of U.S. military equipment donated under the former Military Assistance Program (MAP). Specifically, Security Assistance concerns the transfer of military and economic assistance through sale, grant, lease, or loan to friendly foreign governments. Such transfers are carried out under the principle that if they are essential to the security and economic well-being of friendly foreign governments, they are equally vital to the security and economic well being of the United States.

The primary constituency of ODC-Denmark includes U.S. Department of Defense personnel, Danish Ministry of Defense staff, Danish Chief of Defense staff, the Joint Materiel Command of Danish military services, U.S. defense vendors, and Danish defense-related industries wishing to participate in cooperative programs in order to gain access to the U.S. market. Specific areas in which the ODC may provide assistance include

In 1996, former U.S. Secretary of State Warren Christopher responded to growing concerns about transboundary environmental concerns with the creation of U.S. regional environmental offices in key regions around the world. These so-called “Hubs” were designed to complement the activities of U.S. diplomatic missions by concentrating on transboundary issues of regional and global significance. The Hubs are part of the U.S. Department of State’s Bureau of Oceans and International Environmental and Scientific Affairs (OES).

The Nordic/Baltic Regional Environmental Office was established in 1998 under this initiative. The office, located at the U.S. Embassy in Copenhagen, is the United States’ point of contact for regional environment, science, technology and health issues (EST&H). The Nordic/Baltic region includes Denmark, Estonia, Finland, Iceland, Latvia, Lithuania, Norway, and Sweden with associations in Russia, Poland and Germany concerning Baltic Sea issues.

The REO acts as a liaison between governments, international organizations, nongovernmental organizations and the U.S. government on EST&H issues and coordinates programs of regional interest. An Environmental, Scientific and Technological Affairs officer and one program coordinator staff the REO. The REO coordinates closely with the U.S. Embassies in the region and with technical agencies of the U.S. government to support environmental management, cooperative science, advanced technologies, and public health in the region.

In 1997, the Northern Europe Initiative was launched to encourage government agencies, the private sector and the NGO community to build a culture of cooperation among the Baltic states, northwest Russia, the Nordic countries, Poland and Germany. NEI achieved great success reaching its foremost goal, the integration of Estonia, Latvia and Lithuania into the western European community. Building on the progress made in the region over the last decade, the U.S. Department of State launched a new initiative in the region in October of 2003, the Enhanced Partnership in Northern Europe (e-PINE). E-PINE builds on the success of the U.S.’s strong ties with the Nordic/Baltic region. E-PINE includes three broad areas of focus, cooperative security, healthy societies and vibrant economies. Through e-PINE, the U.S. will continue to support regional efforts to build a civil society, strengthen democratic institutions and combat crime and corruption.

The Nordic/Baltic REO is one of 12 Hubs around the world. In addition to the REO Hub in Copenhagen, the other Hubs are located in Addis Ababa, Ethiopia; Amman, Jordan; Bangkok, Thailand; Brasilia, Brazil; Budapest, Hungary; Gaborone, Botswana; Kathmandu, Nepal; Libreville, Gabon; San Jose, Costa Rica; Suva, Fiji and Tashkent, Uzbekistan.

The ICE Attaché Copenhagen supports other ICE and DHS components in the countries of Denmark, Finland, Iceland, Norway and Sweden. We are responsible for:

The Regional Security Office is staffed by special agents of the Diplomatic Security Service (DSS), the law enforcement and security branch of the U.S. Department of State. DSS special agents serving in regional security offices anchor our overseas security efforts and provide the first line of defense for our personnel, their families, U.S.diplomatic missions, and national security information. More than 480 DSS special agents in over 150 countries advise chiefs of mission on all security matters and develop and implement the programs that shield U.S. missions and residences overseas from physical and technical attack.

Special agents, in concert with other mission or post elements, formulate plans to deal with various emergency contingencies ranging from hostage taking to evacuations. Often, in times of crisis and political instability, DSS special agents rely on the U.S. military for assistance. Since the early 1990s, special agents have worked closely with the military, especially the U.S. Marine Fleet Antiterrorism Security Teams, which have provided emergency force protection support for Department of State operations in a number of countries when the host government was unable to do so.

Special agents are the primary liaison with foreign police and security services overseas, for instance the PET in Denmark, in support of U.S. law enforcement initiatives and investigations. Much of the investigative and law enforcement liaison work done by special agents abroad is on behalf of other federal, state, and local agencies. DSS receives about 3,000 requests for overseas investigative assistance from U.S. law enforcement each year, and has achieved noteworthy success in locating and apprehending wanted fugitives who have fled the United States.

While special agents face a tremendous challenge in implementing a mission’s security program, it is clearly one that cannot be handled alone. In the challenge to safeguard our personnel and sensitive information overseas, Bureau of Diplomatic Security (DS) security engineering officers (SEOs) augment the efforts of the security office. SEOs are the primary developers and promulgators of technical policy and regulations. They design or develop, implement, and manage security equipment programs at our missions abroad. In a constantly evolving technical environment, SEOs are responsible for detecting and preventing loss of sensitive information from technical espionage.

The United States Defense Attaché Office (DAO) performs representational functions on behalf of the Secretary of Defense, the Secretaries of the Military Services, the Joint Chiefs of Staff, the Chiefs of the U.S. Military Services and the Commander of European Command. The Defense Attaché at the American Embassy, Copenhagen, is Captain James F. Gibson.