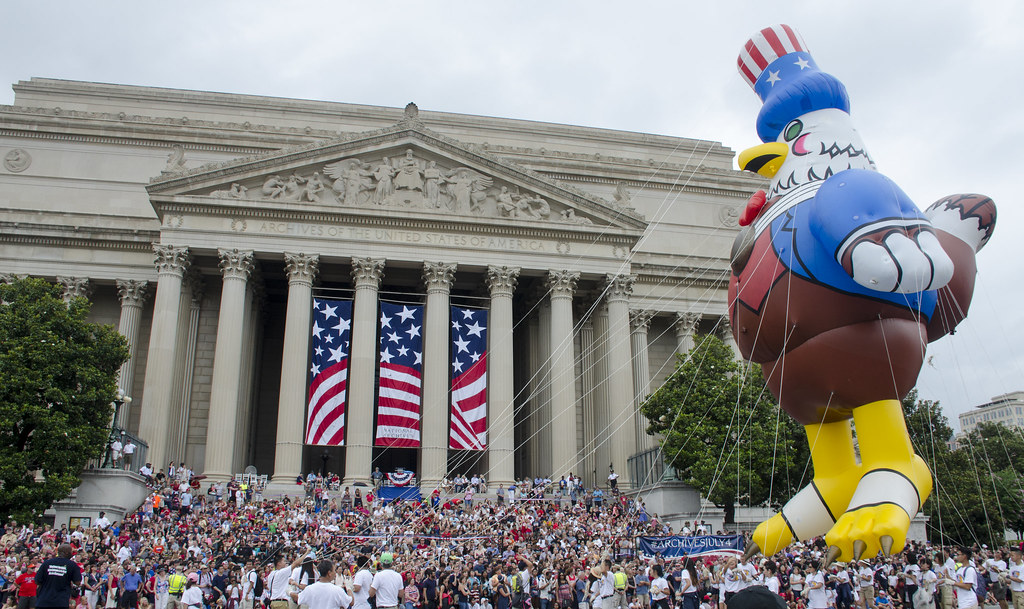 By the middle of the 1700s, the thirteen colonies that made up part of England’s empire in the New World were finding it difficult to be ruled by a king 3,000 miles across the Atlantic Ocean. They were tired of the taxes imposed upon them.

In 1770, a tea company in India, owned by England, was losing money. To save the company, England taxed tea sold in the colonies. Americans dressed up as Indians and dumped a cargo of India Company Tea into the Boston harbor. In 1773, also in the Boston harbor, the colonists yelled and threw stones at the British soldiers.The soldiers fired into the crowd and killed a few citizens. The colonists said the number killed was higher and called it a massacre.

Virginia took the first step toward independence by voting to set up a committee to represent the colonies. This First Continental Congress met in September of 1774. They drew up a list of complaints against England, which became the first draft of a document that would separate the colonies from England. George Washington took command of the Continental Army, and began fighting the British in Massachusetts. For the next eight years, colonists fought England in the Revolutionary War. 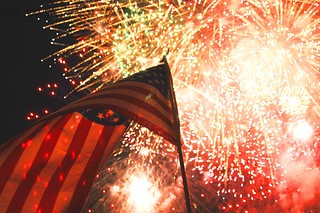 Every July fourth, Americans have a holiday from work. Communities have picnics with favorite foods like hot dogs, hamburgers, potato salad, and baked beans. The afternoon activities would not be complete without lively music, a friendly baseball game, and a pie-eating or watermelon-eating contests. Some cities have parades with people dressed as the original founding fathers who march in parades to the music of high school bands. At dusk, people in towns and cities gather to watch the fireworks display. Wherever Americans are around the globe, they will get together for a traditional 4th of July celebration! 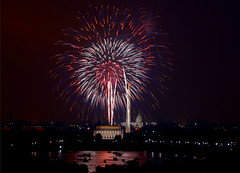 New Castle, Pennsylvania, is home to the Vitale Fireworks Display Company, responsible for more than one thousand fireworks shows every year. In 1922 Constantino Vitale brought his knowledge of making fireworks from Italy to the United States. He passed his secrets on to his four sons, and since then they have been making Americans say “ooohhh” and “aaahhhh” at the lighted colors in the sky on July 4 and other celebrations. “It’s like putting on a ballet show except that the dancers were above, painting the sky,” says Vitale’s granddaughter. 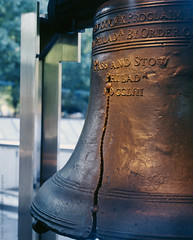 The sight and sound of a ringing bell represents freedom to most Americans, because of the Liberty Bell that rang in Philadelphia when a new country was born.

In 1752 the new bell arrived safely from England, but at the first blow from a hammer to test it, it cracked. Not wanting to delay by returning the bell to England, the officials ordered bell founders in Philadelphia to fix the crack. Two times it was fixed before it was finally ready.

On July 8,1776, the bell rang to mark the celebration of the accepting of the Declaration of Independence. On April 16,1783 it proudly announced the proclamation of peace and the newly won independence of the United States of America.

At every event of national importance, the Liberty Bell joined its harmonious tones to the general acclaim: in 1789, the election of George Washington; in 1797, the election of John Adams; in 1799, the death of Washington; and in 1801, the election of Thomas Jefferson. On July 4, 1826, the bell was nearly three quarters of a century old, and the nation whose birth it had helped to announce was now a youngster of 50. Then, on July 8,1835, while ringing for the funeral procession of John Marshall, Chief Justice of the Supreme Court and one of the signers of the Declaration of Independence, the great bell cracked.

Fearing that the crack would eventually destroy the historic bell, officials took it down from the tower. It was after this that the Liberty Bell received its name. Since then, the bell has been on display. In fact, no one living knows the voice of the Liberty Bell, for it has never been rung since 1835. The crack, which appeared on that celebration, is prevented from widening by a mechanical device, called a spider, installed inside the bell. 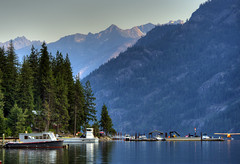 Sometimes a movement is started to make “America the Beautiful” (1895) the national anthem, instead of “The Star-Spangled Banner,” largely because it was not written as a result of a war. The tune is easier to sing, and the whole country is praised, not only the flag. Katherine Lee Bates, an English professor at Wellesley College, saw a view of the mountains that few people saw in those days and was inspired by the “spacious skies” and “purple mountains” to write a poem, which became the first verse of the song. The public loved the poem, and Miss Bates was asked to set it to music. The words and music traveled around the world, and today Mexico, Canada and Australia sing it with their own countries’ names instead of “America.”