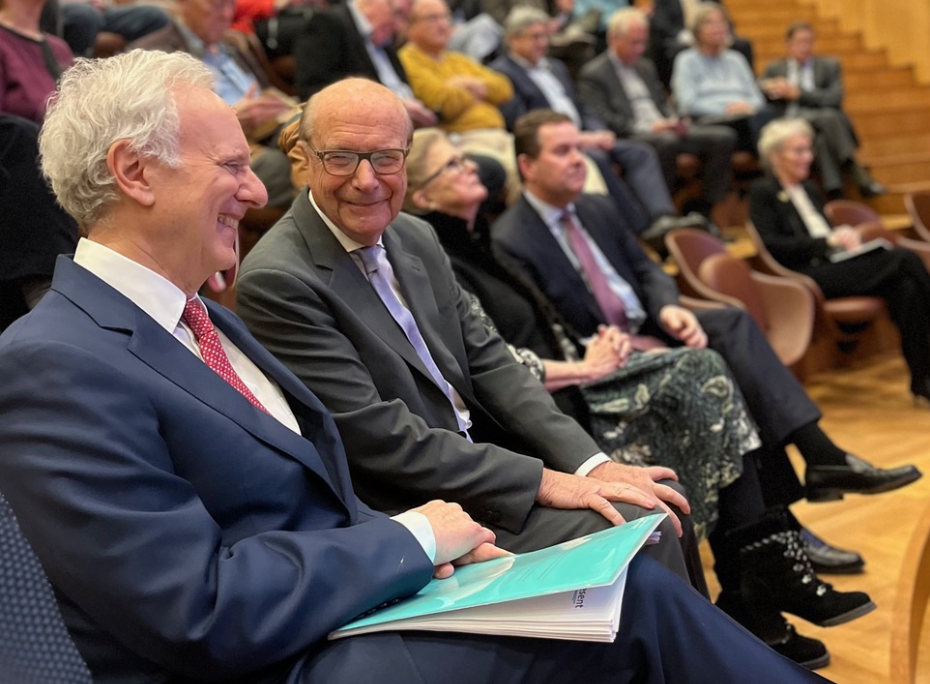 Ambassador Leventhal and Chair of the Foreign Policy Society, Ulrik Federspiel at the New Year Event.

[As prepared for delivery]

Tusind tak, Ulrik, for the introduction.

It is an honor to be here with you to welcome 2023 – A year that will continue to present the United States, the Kingdom of Denmark, Europe, and the world with exceptional foreign policy challenges and opportunities.

You have asked me to speak today on “The U.S. Embassy’s Role in Denmark,” so I would like to take that as an invitation to highlight some of the many issues my colleagues and I at the Embassy in Copenhagen and our consulate in Nuuk are focused on as we begin 2023 with a new Danish government as partners.

My wife Sherry and I arrived over six months ago on June 29. We have been deeply moved by how warmly we have been received by all of you. One of the first questions I was asked was what took you so long?

Well in America we have a process ethics review, the Senate process and then a three-week Ambassadorial program. They affectionately call it “Charm School.” Of course, whenever I tell that story in a group Sherry immediately shouts out “It didn’t work on Alan.

I have used my time here to travel throughout the Kingdom. Multiple trips to Jylland, Fyn, Bornholm, trips to Greenland, to the Ice Sheet Summit Station and Thule Air Base and the Faroe Islands.

I meet with government officials, business, and civic leaders and wherever I go I meet with young people at gymnasiums and universities. I want to hear their questions and concerns about the world and engage with them. It is always an amazing experience. The younger generation is the future of the U.S. Kingdom of Denmark diplomatic relationship.

With all the many people I have met, I am so inspired by the work they do to improve the everyday lives of people in the Kingdom and beyond.

This is a remarkable country. A country that is an important leader and advocate for global human rights, scientific and technological innovation, and the green energy transition.

Our ability to confront these and other challenges is based on a long and close partnership that is grounded in our shared values and common interests. The United States and the Kingdom of Denmark have an unbroken partnership dating back more than 222 years to 1801, when our countries established diplomatic relations

It is a partnership that has never been stronger, or more important.

We lead through shared commitment to the transatlantic partnership, with unwavering support for Ukraine; by our focus on safeguarding the international order; through fostering dialogue and initiatives to defend democracy; by increasing our climate co-operation to develop clean energy technologies; and by cooperating with political and civic leaders to adapt to a changing Arctic.

As members of a foreign policy group that was founded during the second World War, you understand Russia’s invasion of Ukraine last year has upended stability in Europe. President Putin’s brutal, unjust war against Ukraine continues with immense humanitarian and economic costs.

We do not know when this war will be over, but we do know this: Ukraine will emerge victorious.

The United States, Denmark, and our other European partners have not wavered in support for the courageous Ukrainian people. This is a fight to protect democracy and the rule of law.

We will support Ukraine for as long as it takes. Since Russia’s invasion of Ukraine, the United States has provided $24 billion to support Ukraine’s efforts to defend itself, and more will follow, $45 billion in military and economic aid included in the recently passed U.S. government spending bill.

Denmark’s contribution has also been significant.

The barbaric destruction of Ukrainian critical infrastructure by thousands of Russian missiles and drones has caused tragic and devastating hardship to the Ukrainian people. Countries

across the world have responded to these attacks by joining the United States, Denmark, and other partners in providing support to power Ukraine through the winter.

At the same time as the United States, the Kingdom of Denmark, and other partners are demonstrating steadfast support for Ukraine, ever stronger sanctions have been imposed on Russia to increase the costs of their war of aggression.

While the United States continues our unwavering support for Ukraine’s defense, we are also focused on the ongoing challenges that the People’s Republic of China poses to the international order. The PRC has the intent, and increasingly, the capability, to remake the international world order.

We do not seek to block China from its role as a major power, nor to stop China from growing its economy or advancing the interests of its people. We know that many of 2023’s challenges cannot be addressed without China. At last year’s G20 Summit in Bali, with President Xi present, President Biden made clear that the U.S. and China share a responsibility to find ways to work together on urgent global issues that require our joint efforts.

But, at the same time, we will defend and strengthen the rules-based international order, the system of laws, agreements, principles, and institutions that maintain peace and security, protect the rights of individuals and sovereign nations, and make it possible for all countries, including the United States and China, to cooperate.

To succeed in this decisive decade, the Biden Administration’s strategy toward China can be described in three words – “invest, align, compete.”

We will invest in the foundations of our strengths at home our competitiveness, our innovation, and our democracy. We will align our efforts with our network of allies and partners, acting with common purpose and in common cause. We will compete with China to defend our interests – and build our vision for the future.

We will protect innovation, intellectual property, and the creative genius that thrives with the free exchange of ideas in open, democratic societies. We will ensure that the benefits of growth are shared broadly and equitably, not just by a few. We will push back against the Chinese government’s economic abuses and coercion, that undercut the foundations of the international economic system.

All nations must play by the same rules. Two recent pieces of American legislation exemplify this: the CHIPS Act and the Inflation Reduction Act. The CHIPS Act is about increasing our competitiveness so that U.S. semiconductor and telecommunications industries can continue to innovate and compete in the global landscape.

We will build a diverse and secure global information and technology landscape in which the United States and our allies and partners continue to define, develop, and advance frontier technologies.

The other piece of recent legislation, the Inflation Reduction Act, or IRA, invests almost $370 billion to take the most aggressive U.S. action ever in confronting the climate crisis and strengthening our energy security. This bill represents the single and largest investment in climate and clean energy solutions in U.S. history and positions the United States to achieve President Biden’s ambitious climate targets of reducing emissions by 40% by 2030, and putting us on the path to Net Zero Emissions by 2050 or sooner.

It does this while accelerating economic growth, enhancing energy security, and strengthening resilience. As I recently wrote in an op-ed in Jyllands-Posten, the IRA presents significant opportunities for European firms and for EU energy security by accelerating the energy transition – realigning clean energy supply chains to trusted partners.

Danish companies, already leaders in renewable energy technology, are playing a crucial role in the success of the global energy transition. I look forward to continuing my engagement with business leaders and policymakers throughout the Kingdom on how to enhance the IRA to strengthen U.S.-Denmark investment and job creation.

The U.S. Embassy will also continue to work in 2023 with our Danish partners to defend democracy around the world. In early spring, President Biden will host the second Summit for Democracy along with democratic partners around the world.

Denmark, with its particular focus on the intersection of technology and democracy, is an important voice in defending against threats from autocracies, building global support for open societies that respect human rights, and building a shared foundation for global democratic renewal.

This year, I also look forward to building on our joint efforts in the Arctic, not just related to security, but also our economic efforts, shared research, and people-to-people exchanges.

The Biden Administration demonstrated the importance of the Arctic region by establishing America’s first-ever Ambassador for the Arctic Region. Our work together will ensure the Arctic region continues to be peaceful, stable, and sustainably developed in ways that benefit the people who live there.

This year we look forward to furthering the ties between U.S. and Danish researchers. The United States and Denmark are home to some of the world’s finest research and education institutions, and the work of our scientists and academics in fields ranging from chemistry and quantum technology to new energy sources and medicine changes people’s lives. I am committed to highlighting this incredible and innovative work and finding new ways for the finest minds in our countries to work together on solutions to our many global challenges.

The world is better when the United States of America and the Kingdom of Denmark act together as Allies, partners, and friends.

As some of the brightest minds working on foreign policy, you will play a role in addressing our most pressing and serious challenges.

I thank you for your dedication to the Danish Foreign Policy Society’s mission.

My colleagues and I at the U.S. Embassy in Copenhagen and the U.S. Consulate in Nuuk look forward to continuing our important work to build a safer, more prosperous, and peaceful world.